The Lyme disease spirochete, Borrelia burgdorferi, can be transmitted from a pregnant mother, across the placenta, to her baby in the womb. This has been historically reported by the US Centers for Disease Control (CDC), National Institutes of Health (NIH), World Health Organization (WHO) and Canadian Federal Health Authorities.

​The US CDC and Health Canada currently acknowledge the risk of maternal-fetal transmission of Lyme disease on their respective websites.  ​ 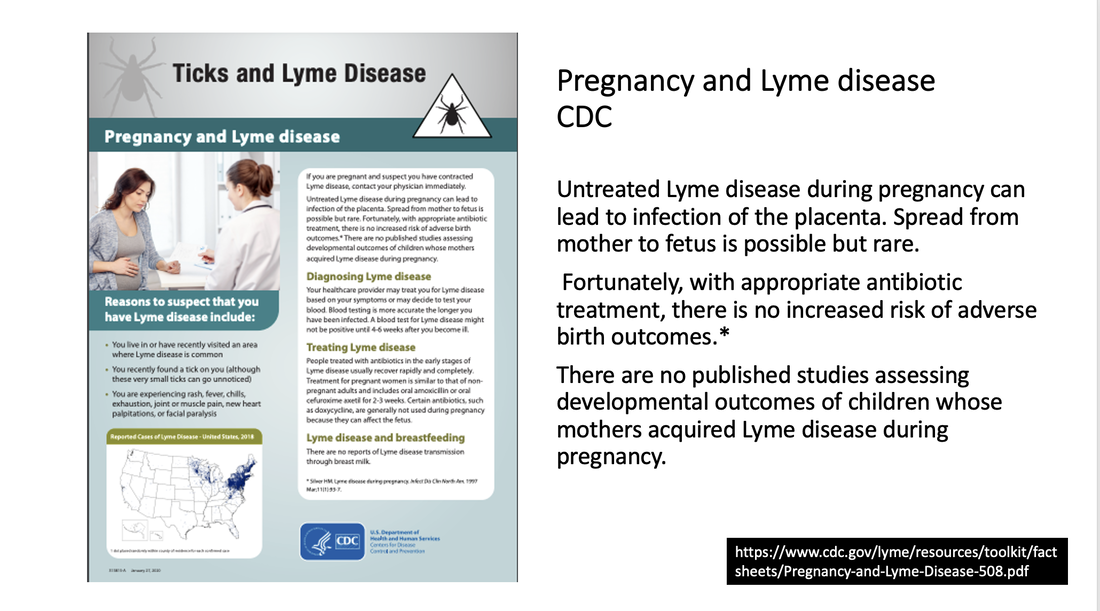 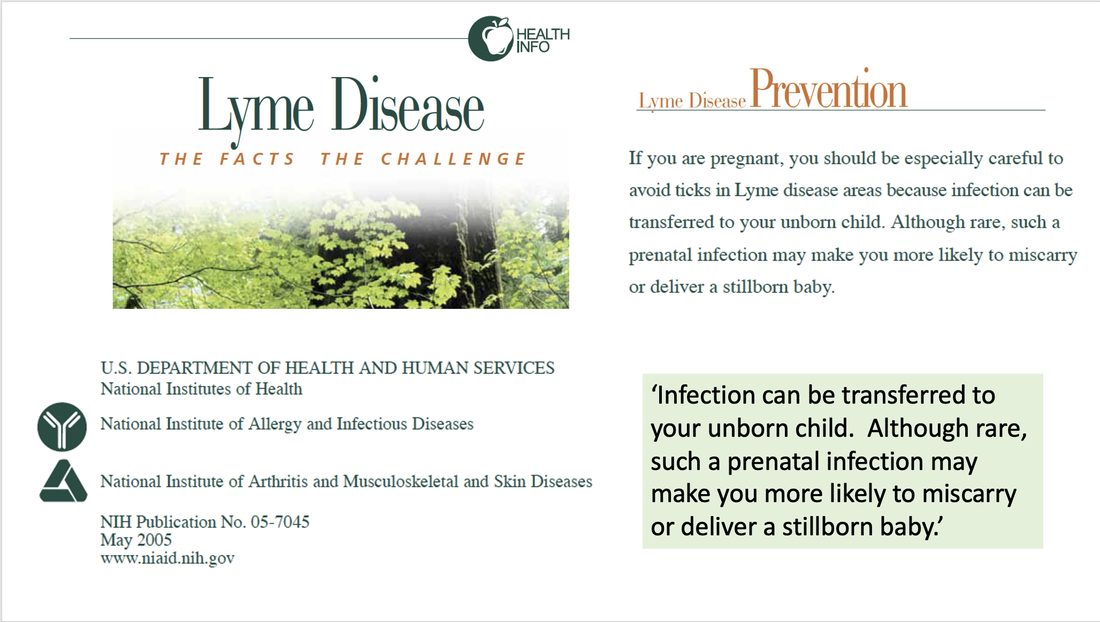 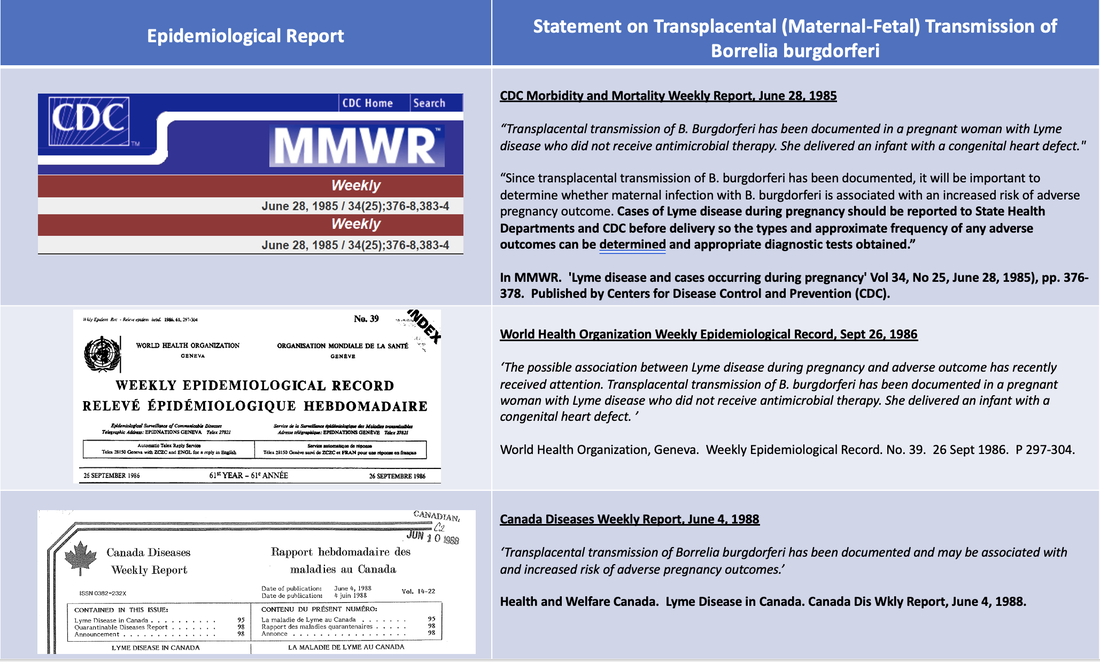 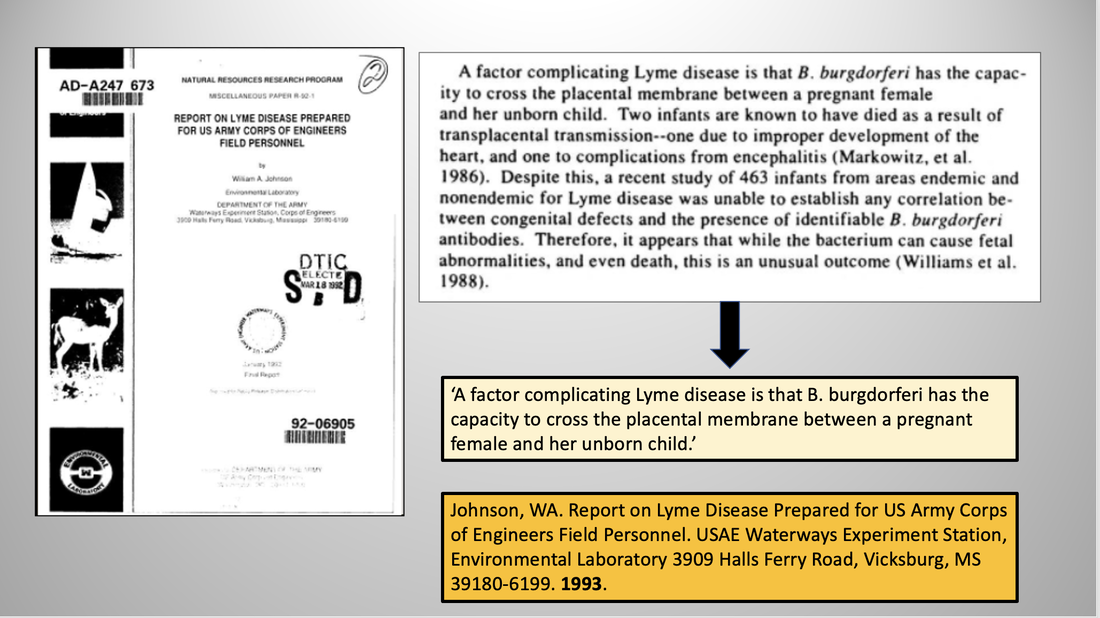 Evidence for maternal-fetal transmission of Lyme disease:
There are 68 cases in which evidence for transmission of B. burgdorferi in pregnancy, from mother to placenta and/or fetus/neonate/child has been described.  In two additional cases Bb was identified by PCR in the breastmilk of lactating mothers.

Breastmilk:(2 cases)
2 cases whereby Bb has been identified in breastmilk by PCR of women with EM rash 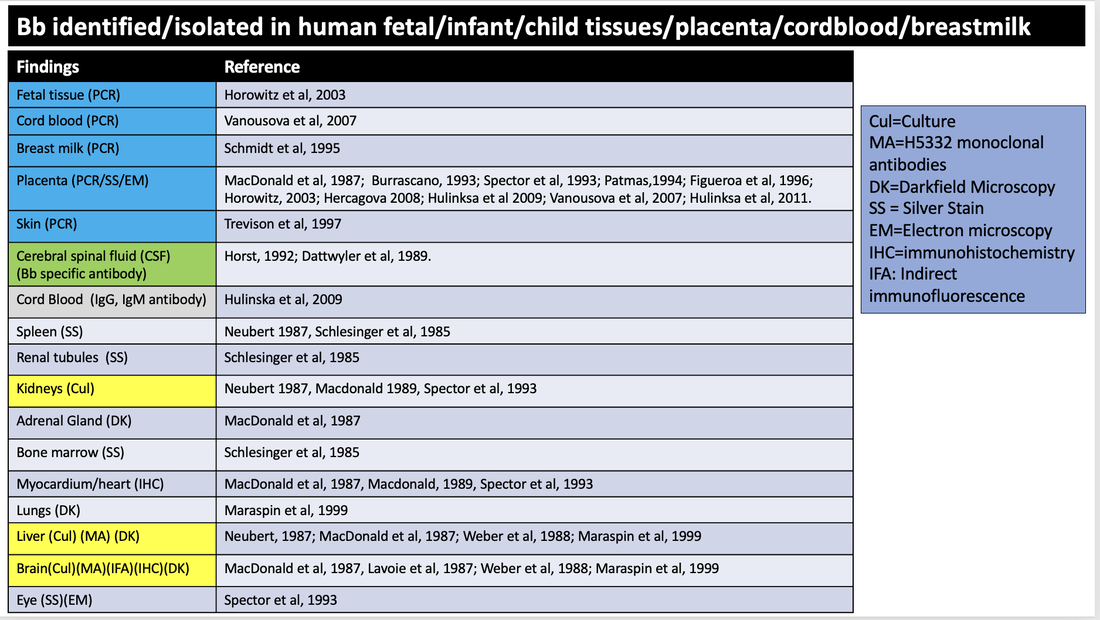 The very first documented case of maternal-fetal transmission of Lyme disease was published in 1985.  Authors stated: “The Lyme disease spirochete may also spread transplacentally to organs of the fetus. The mother in this case developed Lyme disease during the first trimester of pregnancy; spirochetes were seen in the spleen, kidney and bone marrow of the infant at term.  In addition, the infant had several cardiac abnormalities”  "If the infant is ill, the diagnosis of congenital Lyme disease should be considered.’

Several groups of experts authored papers reviewing the clinical aspects and spectrum of Lyme disease, also recognizing congenital infection with Lyme disease.  One paper stated, “Like syphilis, Lyme disease during pregnancy may be associated with congenital infection of the infant and resulting clinical illness. Several reports describe infants who died shortly after delivery, or were stillborn, to mothers who had Lyme disease during pregnancy. Spirochetes were found in autopsy specimens from some of these babies.”

​A second review titled Clinical Features of Lyme borreliosis listed congenital disease as part of the main clinical spectrum of Lyme borreliosis, also highlighting similarities to syphilis.  A third paper by authors who had also reported on the first documented case of transplacental transmission of Bb stated: ‘It is clear that B. burgdorferi can be transmitted in the blood of infected pregnant women across the placenta into the fetus.  This has now been documented with resultant congenital infections and fetal demise.  Spirochetes can be recovered or seen in the infant’s tissues including the brain, spleen and kidney..’

Another group of medical experts highlighted the importance of long-term followup of infants exposed to Lyme disease in-utero, stating,  "The development of these infants warrants further observation, especially since in another spirochetal infection, congenital syphilis, abnormalities are not always evident at birth."

A 1992 publication titled, Current Perspectives on Lyme Borreliosis, authored by Dr. Richard Kaslow from the Epidemiology and Biometry Branch, Division of Microbiology and Infectious Diseases, NIAID (NIH) stated ‘instances of severe illness in infants following transmission from untreated mothers has already lowered the threshold for more aggressive treatment of pregnant woman.’ ​  Another 1992 publication titled Congenital Infections and the Nervous System, authors stated:  "Although congenital infection with B. burgdorferi appears to be infrequent, additional studies are needed to determine the incidence and clinical spectrum of congenital Lyme disease.”
​
A 2015 paper authored by Jasik and colleagues addresses the ability for tick-borne diseases to pass through the placenta of infected animals and humans and the highlights the possibility of intergenerational infection.   Regarding Borrelia burgdorferi infection, authors state: ‘It is possible that B. burgdorferi s.l. has a high ability to penetrate mammalian placentae due to its ability of active movement, antigenic and morphological variation, and many other features and causes diagnostic difficulties and problems.  In cases of intrauteral fetal infections among patients with Lyme disease, symptoms are not homogeneous. Thus, confirming that B. burgdorferi s.l. is transmitted transplacentally may play important role in the spreading of these pathogens.’ Authors also highlight issues of persistence of infection despite antibiotic treatment and state: ‘The ability of long-term survival of B. burgdorferi s.l. in tissues and spreading of spirochetes in the body despite antibiotic treatment can contribute to intergenerational infection of Lyme disease.’ 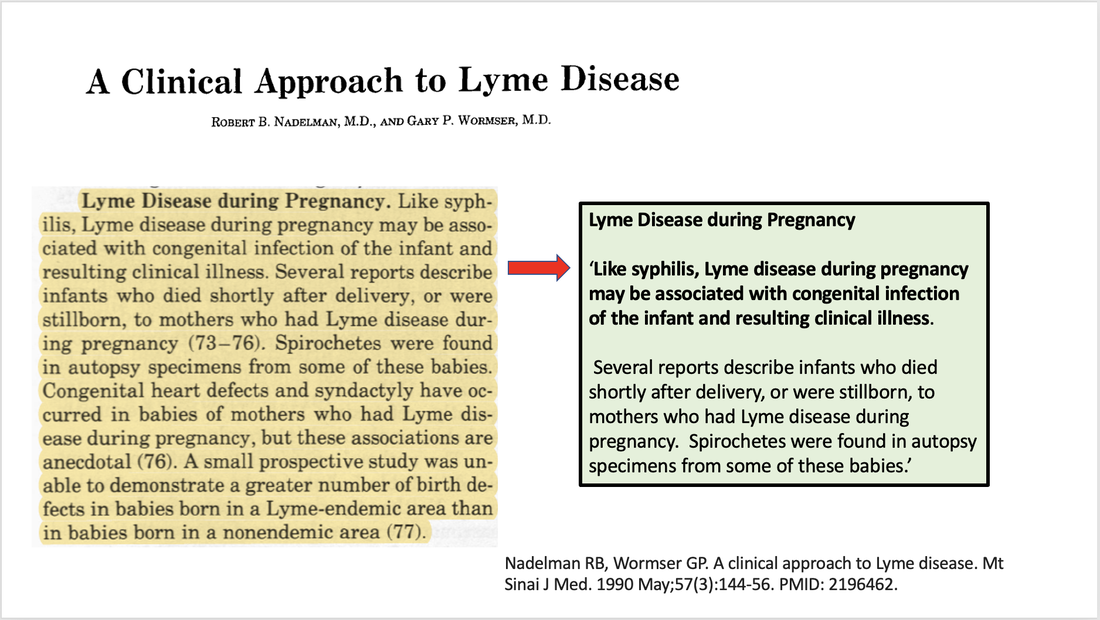 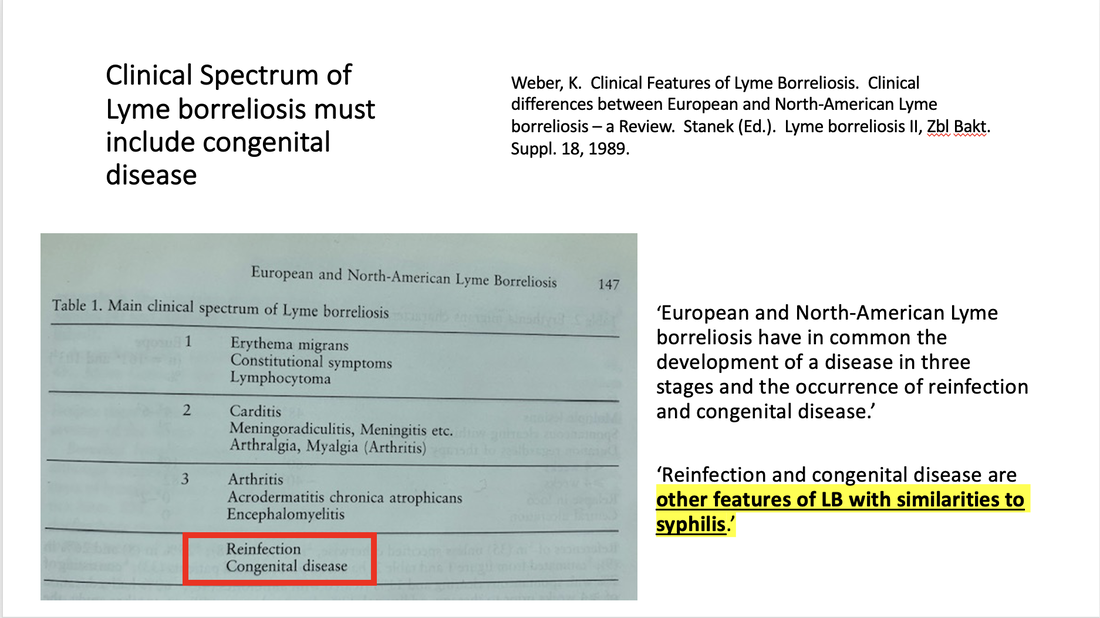 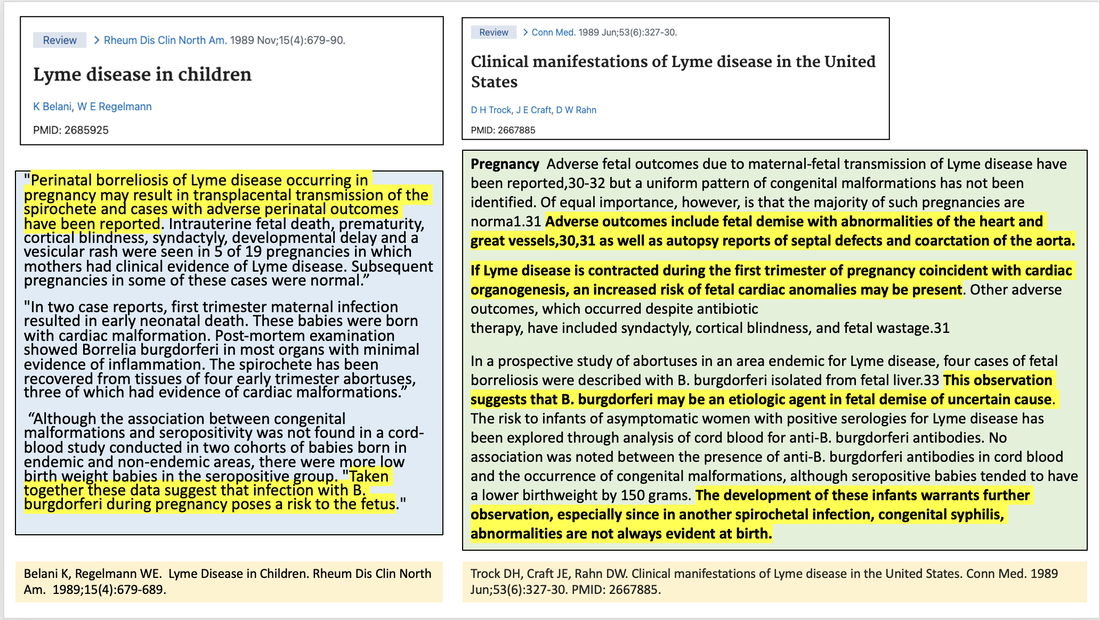 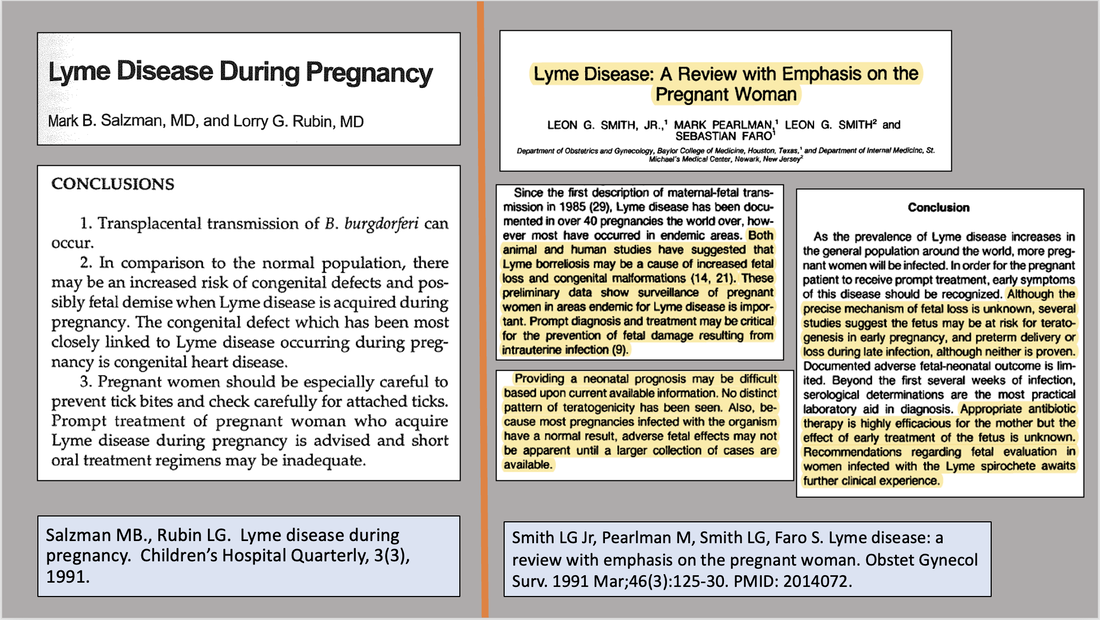 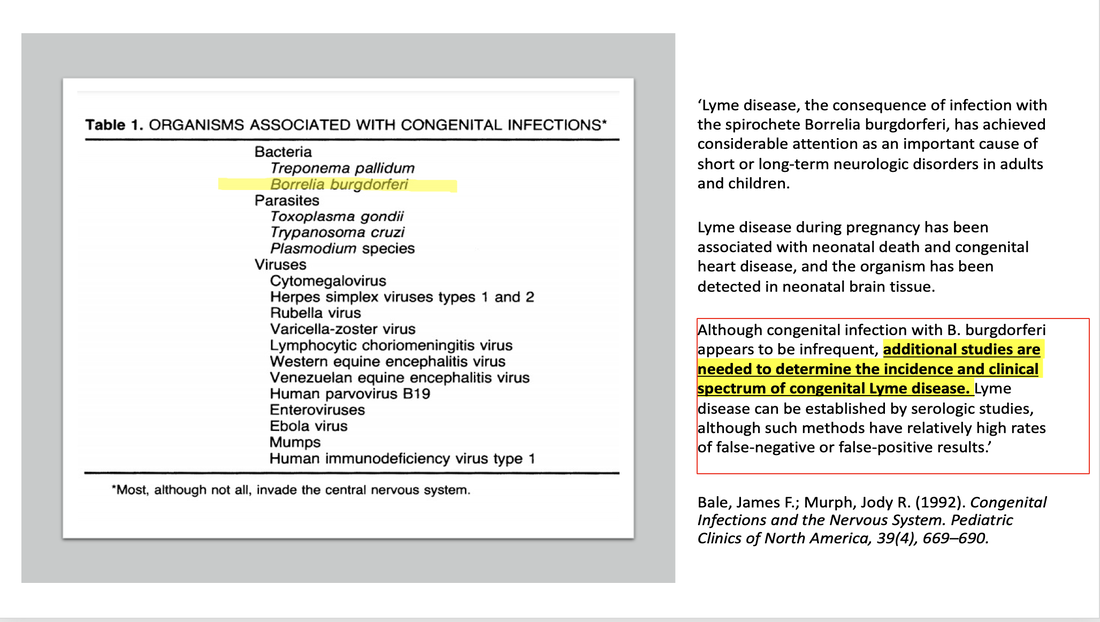 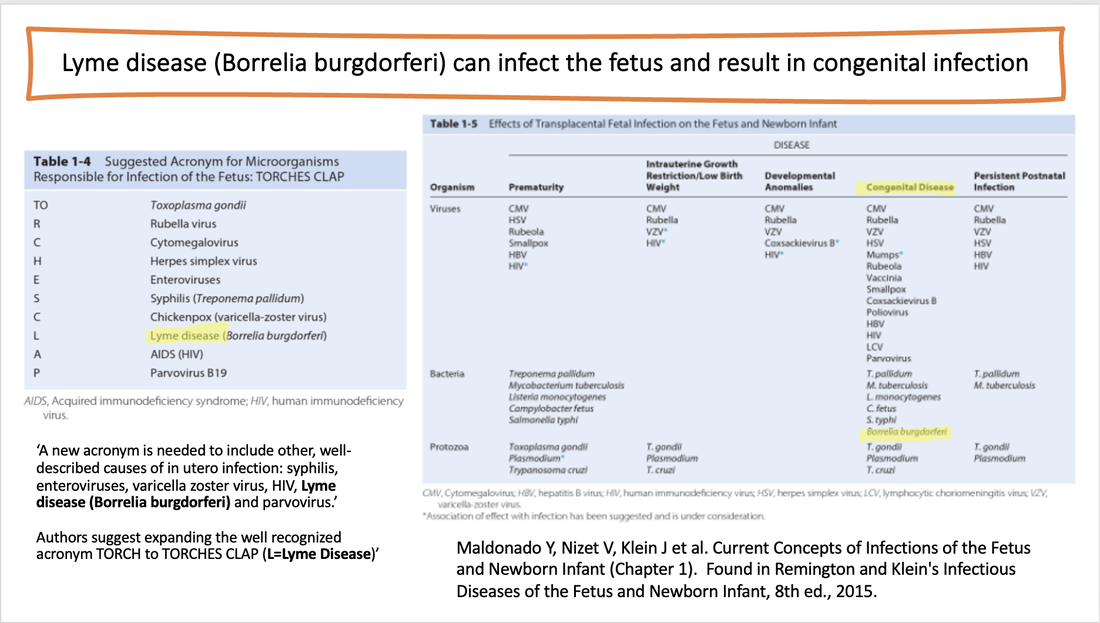 There is also evidence in research done in animals that Lyme disease can be transmitted in-utero - identified in mice, rats, cows, horses, dogs, coyotes and foxes.  Other studies did not find in-utero transmission.  A compilation of these studies and references can be found below:
​